I am in the airplane now. It was an intense last week to me. Normally helping is like a hobby for me 😁, but this week i had no energy. I woke up, tired, my body tried to tell me something and i tried to listen. But also i like helping in he hostel so i tried to also enjoye. It is harder with less energy. i just wanted this to change because i love my energy so much. So i did some bloodtest and went to an oncologue.

Very confrontating again to have a doctor who reads my diagnose(that i have with me on mail) and to hear the words: cancer, metastases, and al the therapys i got and have. To have that question again: how old are you? And the reaction: very young for this.

Also he asked me about the therapy i decided to stop in Belgium to go travel. He told me again that this therapy could be important to protect me but that he also understand that i left and decided to go live my life.

All of this makes me again coming out of ‘my beautiful world’. I had my sweet translator with me as this medical words are a level higher than my Spanish 😉, but the oncologist could speak English to.

He readed my report of my bloodresults and told me it is true that i have not a lot of white bloodcells so that would be the reason i feel tired. My immunesystem is weaker and i am more sensitive to get sick. Also that is probably why this allergie on my skin don’t leaves. I can’t fight against it. He adviced me to keep taking this allergiepills that i normally only had to take 5 days to help me a bit more as my own defense system don’t really help me a lot now. Again a proof to me that chemotherapy makes you attached to medication! It made me to weak to fight against things without medication. I need it to help me fight against something for the moment because i can’t do it alone. I don’t like because they make me even more sleepy and also I can’t drink nothing again of alcohol. Also because i like solving problems alone i guess 😉. But if they help me against the itchy feeling i guess i should keep taking them.

He told me i can have 2 shots of some kind of medicin they give to people during chemo to help growing the white bloodcells again. He looked like he was worried and he only wanted to give them if i did some more bloodtest to see if other things are ok in my body. So it felt like we had a deal 😃.

The only thing was that all of this was Monday evening and on Wednesday i had this flight i am on now. So Tuesday was a very busy day. I needed some more bloodtest in the lab early morning because you need to be sober. In the evening i could go get the results to the oncologue and he would give me the shots. I did the tests, by considence i had again this cute uberdriver i already had once before.

We had some nice conversation on the way so even i went taking blood i had a good morning 😁. I wanted to go get a cofee later to talk a bit more with this boy because i liked the conversation but again all this medical stuff took my time!

In the evening before i had this goodbyedinner with the people of the hostel, i had to go back to the oncologie. 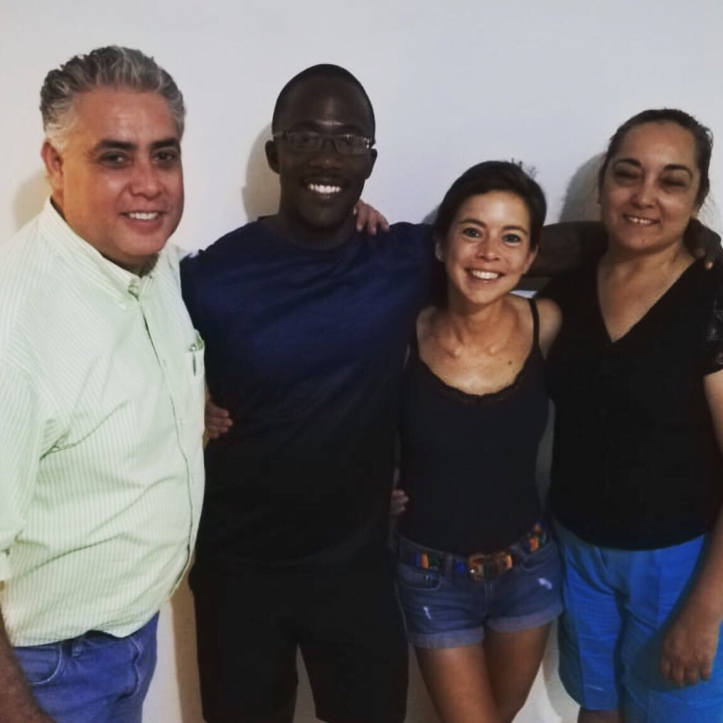 The oncologue told me that the other results are good of my second bloodtest and that i could go buy the shots in the pharmacy and come back to the hospital,so they can already put me one shot.

He told me the second shot i would need to take with me and let a doctor put where i fly next to , Oaxaca this need to bevwithin 24h after the first. And then he wants me to do a new bloodtest the day after that so Friday.

I was already thinking that all of this sounds complicated again, finding a doctor and i also arrive only late this evening. And i go to this little beachvillage, Mazunte. Anyway i want my energy back and i knew i would find a way. I went to the pharmacy and they told me they didn’t have the medicin. I toke a uber to go 4 pharmacys and at the end they told me that this product is for the moment nowere to find in La Paz , i needed to wait 3 days😬, i don’t have 3days because i left the morning after early morning.

I didn’t see that oncologist back that evening, i had no time to go get a coffee and i had to go to the dinner because it was already 9pm. The people i lived with, from the hostel, tried to help me finding a solution to buy the medicin. They called around and discovered a pharmacy in Mexico city i could go to.

I have two flights and a waiting time of 4h inbetween in Mexico city. I will try to go to that pharmacy , it is one hour to go there from the airport so i will go get it and try to catch my next flight. Than i can take the medicin and let a doctor in Oaxaca put them, it are injections. Than i hope to get more of this white cells again and get stronger again. Pfoew what a struggle again, but i guess this things are part now if my adventures 😃. It is just a bit enoying this new part of my adventures, like yesterday during the goodbyedinner i just wanted to enjoy but i was thinking how to to solve all of this so i was in my head somewhere else and didn’t realise it were my last moments sharing with this nice people.

The boy i met trough uber brought me to the airport in the morning so we still had our conversation but without the coffee 😃.

That last Tuesday during the day i also was a bit nervous for the results i think. I couldn’t deal with myself very wel. The morning was nice. After i came back from the laboratory i prepared a breakfast for the people staying at that moment and for my sweet partner in crime Imelda,that i had to leave behind to today🤗. After that i was just waiting to go back to that doctor, all he said the day before was going trough my head and i was realising again how fast live could be finished. Also i got angry that i need medicin again and that i didn’t had energy. Because i wanted to do many things my last day to enjoy but i didn’t had energy and was so tired that i just hanged out at the hostel before going back to that doctor.

I felt sad and angry and i think it was ok to have this moment, i just needed to let everything coming out of me and i had some good talk with Imelda(the other volunteer). It made me realise that when i traveles before cancer i enjoyed more little things and now it is like i travel and escape, be busy to not think, because maybe i am scared. Scared that i don’t have time … but at the end i also realised: time for what?

I have nothing to run after , i don’t need to be somewhere on time. I don’t have a mission i have to close before i go. I just forget the most important before i go anywhere… to appriciate and live. So now i realise this again just before i go, i feel ready to leave La Paz and go to Oaxaca. To start this new chapter in a good way, first i will go to try to get that medicin but i will not stress to get it our catch that flight, i will get it and i will finally get there so this things are no reasons to worry. Just some struggles on the way 😉. I am excited to go with ‘me’ to this new place 😁.

I also realised that i don’t want to travel like before anymore. I don’t have enough energy anymore. My friend, Imelda told me that maybe i should not focus on ‘that i don’t have that same energy anymore and become that same person again’ but how i could live different now and what i can do with the ‘new me’. with how i feel now. I think i am not just interested in going to many places because it makes me to tired. If i feel good somewhere i will try to stay longer, also very good experience are happening like that i discoverd.

My experience in La Paz was great. First i had to get used to all the questions because i think in Europe we don’t ask eachother the whole time: what are you doing? Where are you going? Where did you go? Why? We are much more reserved, a lot more of own space and more individual. I didn’t want to answer always but at the end i like it. It is just being interested in the other and looking if they can help with something. Mexican people are just lovely. I will miss it that i come back to my room and nobody wil ask me nothing Here who ever just comes in the place, can share the moment, gets involved in the conversation or activity. Also i will miss the funy moments, things that are happend there while helping, if i think back to all of this i have to smile 😁.

I am at the airport in Mexico city now, i completed my mission. I found a very nice uberdriver who took me to the ‘pharmacia especialidadas’ in the center. I explained my situation. He waited for me. They had the medicin i need there but it was very expensive! I asked if they don’t have a medicin with the same substensions but cheaper. They looked on the computer and found a much cheaper one! I took it but as it had not the same name as the one my doctor wrote on the paper, i was not sure if i could take it on the airplane. So i wanted already to find a doctor also as i had some time left, that could already put my one shot of the two i need. The uberdriver took me to a doctor and after that back to the airport to catch my next flight. He was so nice! Also i could pas the control with the needle and the product in my carry on luggage without any problem, lucky me. Now i feel realy ready for a next chapter 😁.

I will only need the second shot in mazunte and also it is time again for my next injection of Zoladex to keep me in my menopauze. I just arrived in the evening and it looks really small, i came by a very small airplane to,it is in surounded by sea and mountains, totaly different than where i just fly from. The airportroof is made of reed. It looks magical, when i arrived and sat in the car , the sky was cloudy with the sun coming trough surounded by many colours. We past many hills with only nature. Also i saw on my way many local people in little village living realy simple. I love it already! I only hope they have some doc here 😃.