Everything was going to well😬

The last days i was suffering because i had so much pain. I already had this pain in my breast for 2 weeks but i could live with it and kept myself busy to ignore.

On Thursday i really needed to drink something on my heavy painkillers that i already toke, to help me sleeping well. Thursday they were not enough anymore to help me with the pain. I went lunching with my little sister in law and yes, i had a good time, the glass helped me for maybe 2 houres. 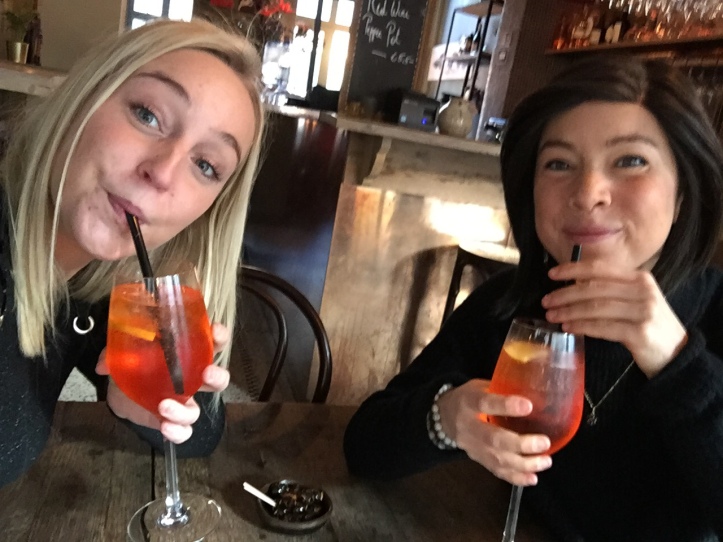 After i felt a bit tipsy and so tired that i could rest in the afternoon, this solution was only temporary.

But in the evening it started to become worses and on Friday, when i had my radiations i told them it was my last radiation, that they had to stop, because I couldn’t handle the pain anymore, all the other times i told with a smile i had pain so i can imagine they didn’t realise how bad it was but this time i was crying and i had the feeling they still didn’t understand. But it isn’t always the same nurse so i understand he doesn’t know how fast i cry.

The nurse told me to hold on, while i was going under the machine with a lot of pain. He said, only 8 more times , and that i could put flamazine against the redness on my breast. That it would be better a week after the last radiation. On that moment with that pain i had that sounded terrible. Also he said that he knows it is mentally becoming harder. I think , because he don’t know me, and he doesn’t know i almost never cry, he was not realizing that the reason why i wanted to quit, was not the mentally side. I was good next to this terrible pain, and the redness of the radiations are nothing to me in comparing with the pain inside my breast.

It didn’t help me to say that i had 8 more times to go because that is a lot when you are on the limit of pain! I heard everything I didn’t want to hear and i planned to stop anyway because this pain inside my breast was killing me. But i know they tried to help me feeling better of course, because i saw they we’re worried about me and that is sweet.

After the radiations i had appointment with the oncologist of radiotherapy. I have one appointment every week. When he came in the room , he saw my face was not like all the other times, he looked at my breast and saw that she was not looking good. He told me this had nothing to do with radiations. He gived me a paper to go to take blood, after that i had to wait an hour for the results. When we went back to him for the results he told that i had an infection in my breast. He gived me a prescription for medication to take and promised me it would be better 24h later. Also i could take the heavy painkillers the whole Saturday, and i did. I needed them because my Saturday was terrible, I couldn’t leave the couch. I had a family dinner that i had to cancel unfortunately.

I wad about to going to hospital again in the evening because i was so weak because of the pain and my head was about to explode but at the point that i decided to go, the pain became more livable. It still hurted but at least i could shower and do some things. The doctor his promise was right, i already was feeling a bit better with the medicin. On Sunday i was happy because it was already less painful and i could live with it. I didn’t had the feeling anymore i just wanted to cute of that breast to solve the pain. But it still hurted a lot.

My family prepared a plate with food for me of the dinner i mist and gived it to me on Sunday. So sweet. I had a friend passing by and shared the food with him. Also we talked and i had distraction so i was much better. Normally i was invited to go with my buddy/friend , Jolien to go eat to here family on Sunday also for this i was exited. So i mist 2 familydinners in one weekend because of this! Lucky i had good company on Sunday and even on Saturday when i was with a lot of pain i had some unexpected visit of another friend also. I feel so lucky with all this amazing friends i have.

Also Jolien, joined me again that Friday to the radiations because i told here i wanted to stop and because i told here about the pain and she knows me so she knows that when i say this, i really have pain. She is really my partner in crime 😃. Even i had so much pain, i managed to get her on the picture with me and sint niklaas while waiting for the bloodresults 😁. 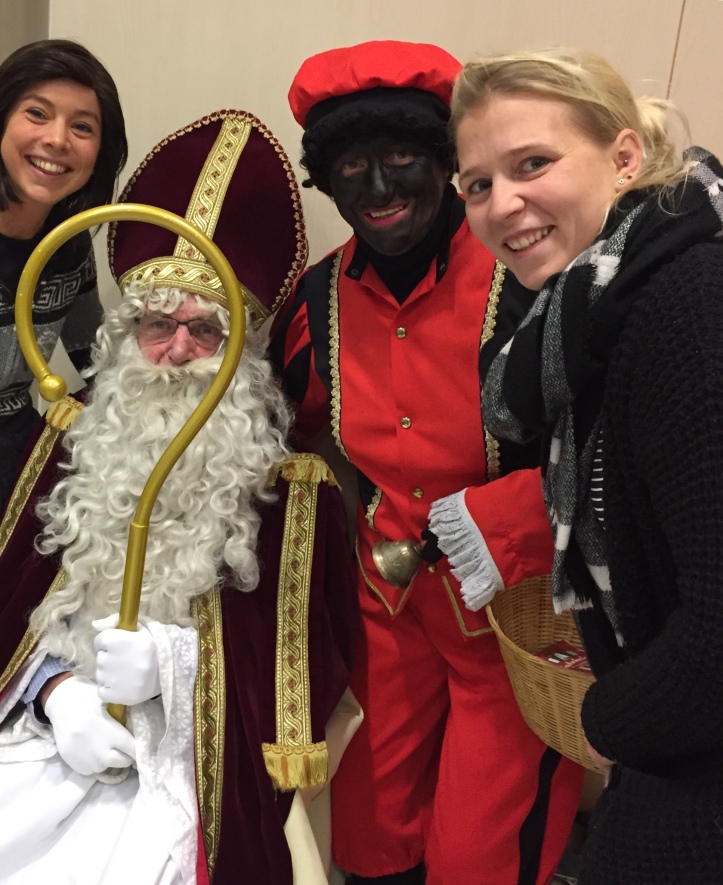 Today on Monday i had to take blood again before getting my radiotherapy. I went in the morning after i got my radiations. After this i had an appointment again with my doctor. He looked at my breast and saw that it still looks almost the same like before the weekend so i had to go take an echo of it and after that i had to come back for the results. De doctor that took the echo his face looked very worried while he was looking and i heard him telling something about an abces to a student. Then he told me that i quickly had to go back to my doctor of radiotherapy and that he would already call him. The way he act made me worried, i was scared of getting another operation.

I was back in the department radiology waiting for my doctor. I also still had to let the nurses put new lines on my body. Because i only have 7more radiations to go in my breast and even the ones in my neck are already finished. This lines they put are to see easily when you are under the machine where they need to put the radios exactly. I had lines but the last 7 radiations they want to put more exactly on the place where the tumor was in my breast and before i got them also under my arm and between my breasts. So they needed to resign ligns for under the machine. When she told me they would do this while i was waiting the doctor, I started crying, the doctor of the echo made me scarred and I didn’t know what it meant to have an abces. The nurse toke me with here to talk a bit and explained me what it is so i got already a lot less worried. They didn’t draw the new lines because they didn’t know if we would continue radiations this week.

When i went to the doctor again to hear the news about the abces, he told me i had to let remove this the same day or the day after. So i had to make an appointment with my gynecologist in the hospital in Aalst to do this. The reception told i could go the day after , on Tuesday at 9 in de morning they would put me asleep to remove it.

That evening when i finally sit to rest, i felt happy again knowing that the day after the problem would be solved, the pain could only start to become less. 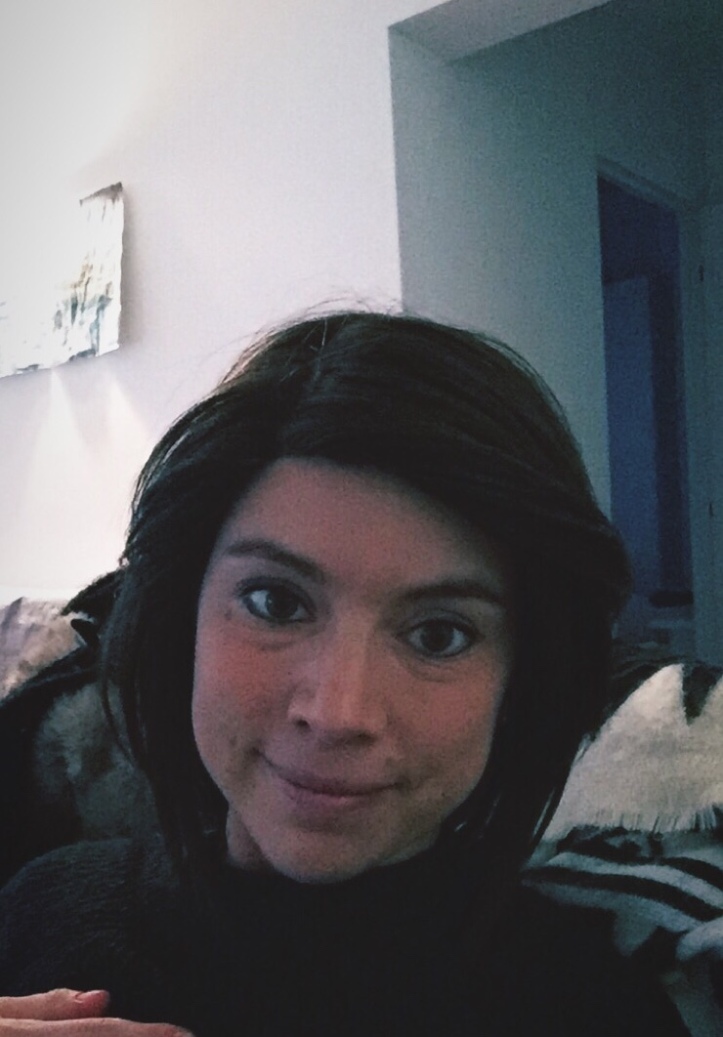 but at the same time i had again so much pain like my breast would explode, and she did! The wound of my breast operation in September went open again because of the pressure of the abces. The dirt was looking for a way to come out and found the weakest place, the scare of my surgery. Aawch. I went to emergency with Jolien. 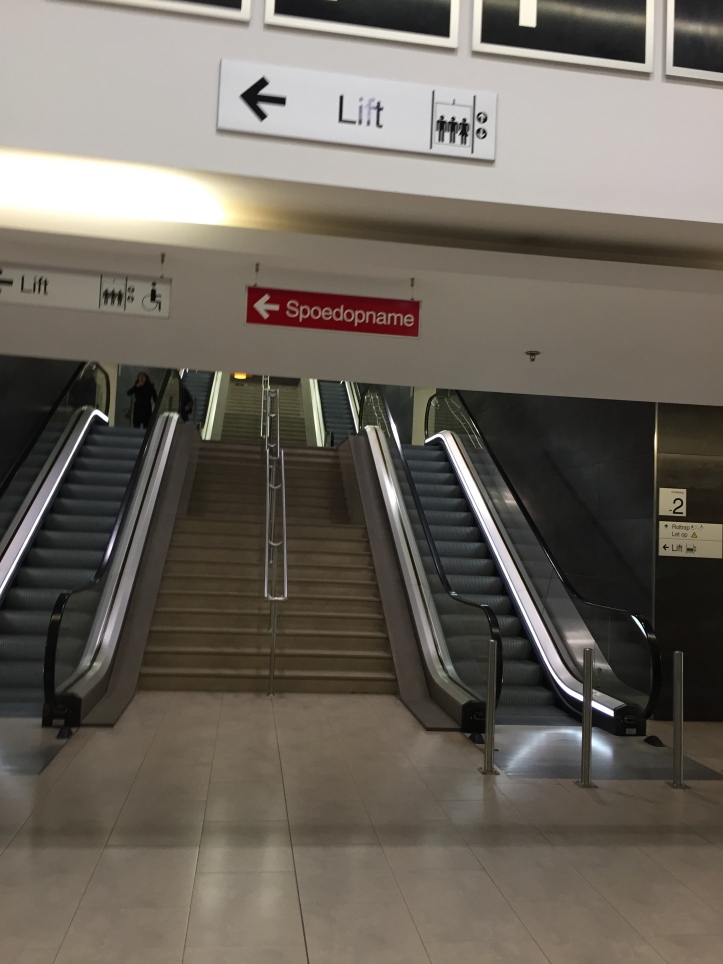 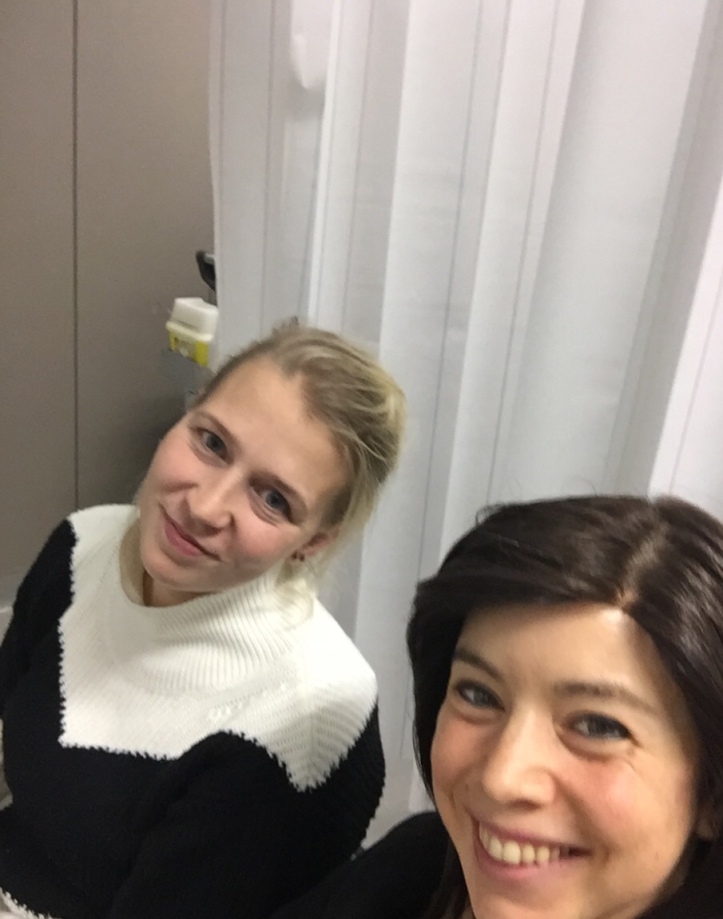 What an evening again, i was lucky that my gynaecoloog was the one working at night because if i need to explain my medical history to a new doctor, I don’t know where to start anymore.

First the nurses took a lot of blood …again.. than my gynaecoloog looked and asked if we would try to cut in my breast already without putting me asleep. Only when she just touched my breast already i was dying, so this was impossible. I can handle pain but this would be to much. She also told me this will need time to heal so also the rest of my radiations will need to wait a bit. I told her about my flight i want to catch in December to Mexico and she told me that she would talk to this specialist in woundcare . They maybe have some method that could help me healing a bit faster, a kind of system to put on my wound after the surgery.

Because i got chemo in the past, that killes many good things in my body together with the bad ones, everything i get, like wounds for example are not healing fast anymore i am much weaker. That is also the reason why i get faster infections.

So i stayed the night in hospital, thinking i would get the operation in the morning. 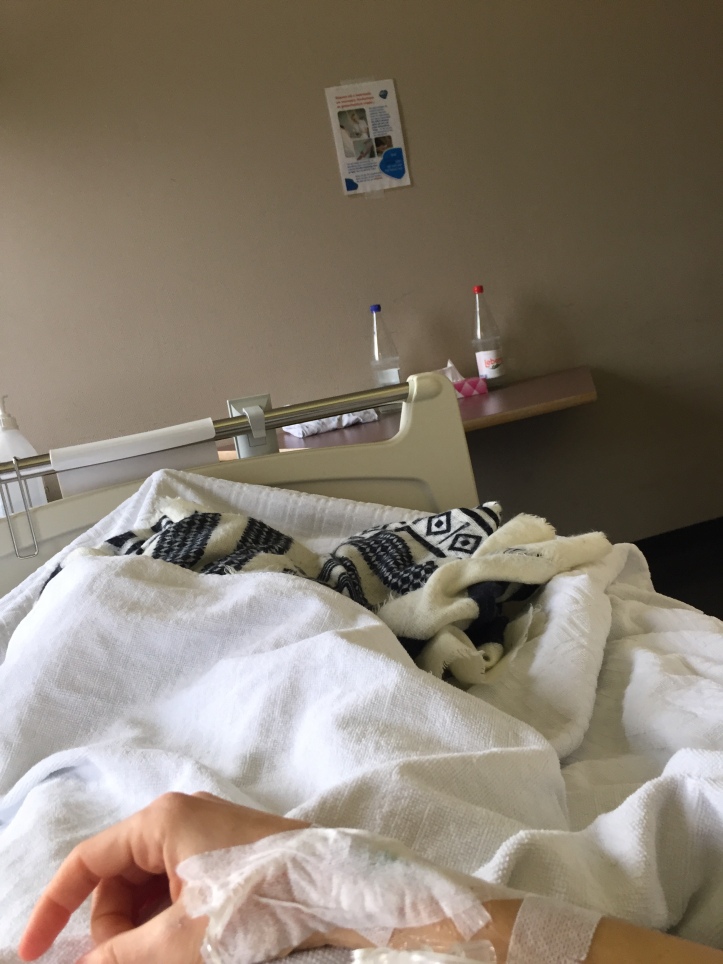 but it seems to be at 18h in de evening they will operate and i can’t drink or eat until then. I just need to lay here , waiting.i even don’t know how long i need to be here.If i knew that, i would at least have eat something that night. This cancer is really testing me, my patience, looking how much pain i can handle , how long i can stay positive. But today, Tuesday, i am waiting the operation, i am tired and i have hungry, so even i always love to talk and smile , today i don’t. I feel angry and i just want this day to be over, it is a day he is winning. Also the thoughts that i maybe wil need to postpose the flight makes me sad. This is the reason why i do all of this. To travell. This is the most important piece of the puzzel, if you take it out, it falls apart anyway.

I hope there comes an end on this. I found a way to live with the cancer but i have the feeling always new struggles with my health crossing my path . I love this struggles in traveling, they are challenging ,but now i will also have some healthy struggles on my way maybe😬 .

Well, these struggles, is what makes us enjoy the good times and little things in life i guess 😉. So i will enjoy these good times until the fullest! And also the little things, like tomorrow when i am allowed to drink and eat again!